A Hat Tip To Dan Goldgeier For Grabbing The First Image, Which... 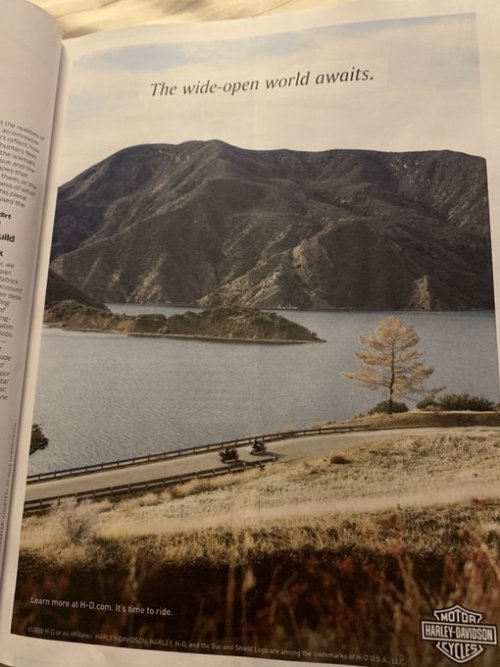 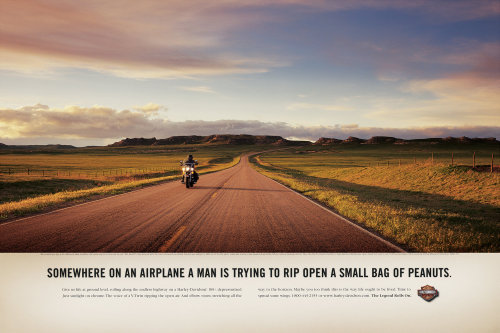 A hat tip to Dan Goldgeier for grabbing the first image, which is of an ad for Harley-Davidson that appears in (I think) the current issue of Outside Magazine.

The lower image is of an ad done for the same client back in 2002. The agency was Carmichael Lynch in Minneapolis. Harley’s current agency is Droga5, but I can’t imagine they had any involvement at all in the new ad.

I don’t know if the new ad had an agency, or if it was done in-house, or if it was generated via AI. I’m afraid the third suggestion is entirely possible.

Both ads seem to have had the identical brief: something like Harley-Davidson gives you the soul-liberating freedom of the open road. But the similarities end there. The 2002 photograph (shot by Chris Wimpey) is emotionally powerful, and it stirs a yearning to be in that scene. The new photograph (shot by who the fuck cares) is closer to something from a cheesy tourism campaign, as it lacks even a centre of interest (unless you’re interested in buying those hills in the background). And that typeface? I’ve never seen it in a Harley ad before and, God willing, I’ll never see it again. It’s the font of a daily affirmation, not of the world’s most masculine brand.

The 2002 headline does the brilliant thing that every good copywriter seeks to achieve: It creates a strong feeling without dictating to readers what they ought to feel. By contrast, the new headline is flat and literal, and it evokes none of the associations that the Harley-Davidson brand owns so completely. Apart from the logo, there is nothing Harley about this ad, nothing at all. If you replace the motorcycles with a Photoshopped bus, congratulations, you’ll have your Greyhound ad all ready to go, and you can log off early today.

The world is in chaos right now, and there are obviously bigger things to worry about than one really bad ad. But if we’re optimists, we can look forward to a world that feels a little more normal by this time next year. And when that normalcy returns, it will be ideal if the brands in which we’ve invested so much faith and hard work still have some kind of meaning.