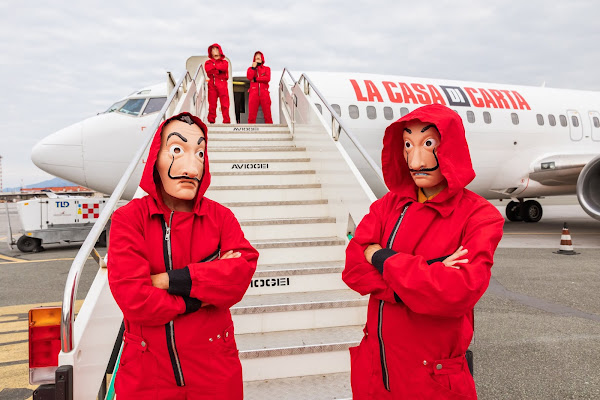 What’s worse than waiting months for the next season of your favorite TV series? Seeing spoilers as soon as it’s released. And the more the show is anticipated—as is the case for Money Heist, Netflix’s flagship show that’s releasing it’s grand finale this year—the more serious the problem gets.

Just think of the fact that as much as 12.5% of online conversations related to a single show are spoilers, which peak at the very first hours of the release1. A figure that feels unavoidable when the conversation concerns a show with dedicated fans around the world like Money Heist.

That’s why to launch the highly anticipated Volume 1 of the last part of the series, Netflix has organized a special event for the most avid spoiler makers. Thinking they were about to fly to Madrid to take part in an exclusive Money Heist screening, the unsuspecting guests didn’t know that the event would be in the only place where the phones must remain off: on an airplane.

Taking off the morning of Netflix’s worldwide release, the spoiler makers remained in the aircraft, far away from the Internet, for the duration of the first five episodes of the last part of Money Heist. Five hours that allowed millions of fans on the ground to view the series finally free of spoilers while remaining an unforgettable experience for those who were on board: the one and only time anybody would have wanted to be taken hostage by the gang.