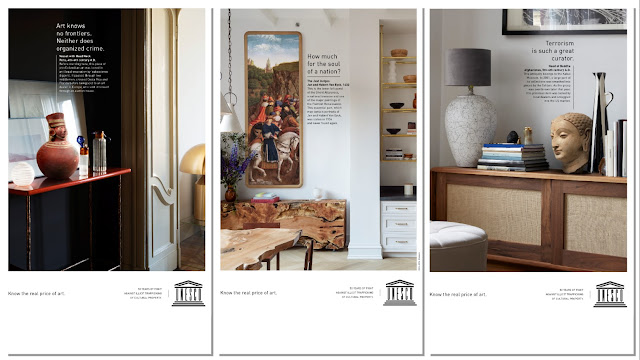 Trade in cultural goods represented more than 60 billion dollars in 2018. An estimated

addition of nearly 10 billion dollars would be illicitly traded. This trafficking, fueled by the

looting of archaeological sites, often on an industrial scale, is a blatant theft of populations’

memory. It is also one of the most important sources of funding for criminal and terrorist

This is a reality that we tend to underestimate: theft, looting and illicit trafficking in art are

real crimes. In addition to directly funding criminal organizations and weakening the

societies of the affected countries, they deprive people of their History and culture. An

For 50 years, UNESCO has been developing the legal framework of reference to fight against

this scourge and leads the daily fight with Member States and partners. For the 50th

anniversary of the UNESCO Convention adopted in 1970, the organization decided to speak

out through an international campaign.

The objective: to raise awareness in the art world and particularly among art buyers about

the disastrous consequences of this traffic.

At a time when we are increasingly questioning the impact of our consumption, whether it

be food or clothing, it is time to raise awareness and call on everyone to be extremely

vigilant. This is the objective of the press campaign imagined by DDB Paris: to reveal the real

price of art to as many people as possible.

hidden behind certain works. Each visual presents an object in-situ, melted into a buyer's

interior decoration. But a catchphrase crudely reveals the other side of the coin: financing of

terrorism, illegal excavations, thefts from a museum destroyed by war, liquidation of a

people's memory... Each ad tells the true story of an antique stolen from a region of the