In honor of National Hispanic Heritage Month, we are profiling our illustrious Head of Growth in France and Switzerland, who’s been with NewsCred for five and a half years. The article was written by Meghan Catucci, a Senior Customer Success Manager and D&I Council leader at NewsCred who’s also lucky to call Jaisy a dear friend.

Jaisy De La Cruz sits in her Paris apartment, dialed into our Zoom call. Her apartment is chic, unfussy and elegant, just like her.

Like many people considered a “minority” in our culture, Jaisy has to laugh when people ask her about the Latinx experience.

“People have asked that, and really, what does that even mean? My experience is my experience. I have nothing to compare it to.”

Jaisy was born in the Dominican Republic, in the early ‘90s. When her parents split, her mother brought her to the U.S. at the age of nine — Brooklyn, N.Y., specifically — to give her a better chance in life, particularly because their home area was becoming more and more unsafe, with crime on the rise. Jaisy is the middle of three, with two brothers; her mother could only afford to bring one child to the states, and she assumes she may have been a beneficiary of a cultural attitude that girls needed extra protection, as the family readily accepted that if one child were to go, it should be her.

While she had some extended family in Brooklyn, and cousins her own age, she was largely isolated at school. She went to a Catholic school in Williamsburg called Transfiguration that her mother’s youngest siblings had attended. It was a step up from the local public school and her family overextended themselves a bit to make sure she could attend it.

“I didn’t speak English — that was probably the most significant thing, but it wasn’t a huge obstacle for me because I wasn’t old enough to have shame over that.

“One memory that stands out is, because my parents have always called me by my middle name, Yasmin — Jaisy is not a real name in Spanish — on my first day of school in the states, they called me by my first name and I was not at all responsive. The teacher called the principal, the principal called my mom, and later that day the principal announced over the loudspeaker, to the whole school, that my name was Jaisy and I just didn’t know.”

She attended Transfiguration for a year, and because she didn’t speak English for her first nine months in the states, her grades…could have been better. Despite knowing that she didn’t speak English and was unable to follow her studies, the school was poorly equipped to address this and did nothing to help get her up to speed. Still, she had high expectations for herself:

“I would still go to the student assembly every month and hope and pray that I would win the Student of the Month award. It didn’t quite click with me that that wasn’t going to happen. I learned nothing that year; I would get a 4 out of 100 on geography tests.”

Adding to the culture shock was the simple change in climate. She had a windbreaker as a coat, completely inadequate in the cold New York winters, but she figured that’s just how things are in this new place. She didn’t think to ask for a heavier coat.

“I just assumed that was the way it was supposed to be,” she said of these early experiences. “I think in general that just is the immigrant experience; there are so many things that could be better but that you just accept as they are, because you’re not home and you know things are supposed to be different here.”

By the following year she had assimilated a bit more, and was fluent by the fourth grade. She credits her youth at the time for helping her catch on quicker; she was not embarrassed and would ask questions and get her cousins to teach her certain phrases until she caught on, even if she sometimes used them in the wrong context. 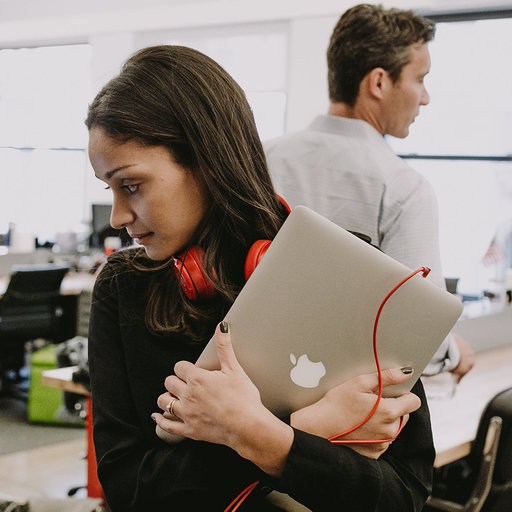 Jaisy attended college in France, and contrasts her early experience with learning a new language with her attitude and trepidation there. Not only is it preferable not to be associated with Americans while in Paris — it’s probably unsurprising that we don’t have the best reputation there — but Parisians can be notoriously racist, and while Jaisy’s ethnicity isn’t completely obvious on sight, it’s clear that she’s not white.

“If I didn’t know how to perfectly say something in France, I would just avoid the situation entirely,” she said.

Jaisy experienced blatant discrimination in Paris, far and above anything she’d experienced in New York. She’d be treated poorly at restaurants, overhear snide comments and even had someone remark that she probably couldn’t afford to spend money at an establishment .

“I was checking out at a hair salon once, and I happened to look in the direction of a woman getting her hair washed, and she was in the middle of saying something racist about Arabs,” Jaisy recalls. “We made brief eye contact and she apologized, saying she didn’t know I was listening. I just told her I wasn’t Arab, which prompted one of the salon workers I’d been to regularly to ask where I was from. When I told her I was Dominican, the woman said: ‘Oh, that’s why you speak French — we civilized that country many years ago.’ “

[This is not only racist but also factually incorrect; the Dominican Republic was originally a Spanish colony.]

“I was too stunned to react, I think. That was the first time I’d experienced something that blatant, but those kinds of exchanges ended up being pretty common here.”

People in France would assume she’s North African — a group of people who are heavily discriminated against and targeted particularly in Paris.

“Those things don’t cut me as deep, because it’s not accurate; however the thoughts and sentiments are absolutely nasty, and I can definitely relate that to things that are closer to home.”

All that being said, after returning to the states for several years, Jaisy decided to move back to Paris permanently last year, in spite of these experiences. For her, it’s fairly simple; although racism can be especially overt there, it’s not systemic in the way that it is in the U.S.; the lack of institutionalized racism, perhaps unsurprisingly, makes for a better life.

Jaisy’s more explicit experiences with racism in the states were more recent, upsetting, and closer to home. Her older brother was arrested for DUI in New York two years ago, and it exposed her to American racism in a way she hadn’t seen before.

It was early on New Year’s Day, and he had pulled over on his way home from a party when he realized he was too drunk to drive. He parked the car, left it running to keep the heat on in the January cold, and ordered an Uber — then fell asleep while waiting for it. Because the car was running with him in the driver’s seat, when a police officer found him he was still considered to be driving under the influence.

After being arrested, he was informed that there was a warrant for his arrest in another state for a drug-related crime that he didn’t commit. He was advised by his lawyer not to plead guilty to the DUI, since it was better for him to address that case without a previous conviction. As a result, he had to wait it out in jail in downtown Manhattan for six months.

“It was terrible — and the intense and graphic incidents he witnessed every day were truly awful,” she said.

Some of the worst parts of the experience was being on the receiving end of police bias and discrimination.

The whole experience also highlighted for Jaisy her relative privilege, based on something as trivial as skin tone.

“My brothers are both darker-skinned, and because I’m lighter-skinned I have some fluidity that they don’t have,” she said.

Overall, Jaisy’s heritage, family and interactions have certainly influenced her own identity and her view of the world, but for her (and all of us) that’s ever-evolving.

“Honestly, I feel like I’m still in the middle of my experience as an immigrant; I’m not a first generation American, and now I’m in another country altogether. There’s no one factor that’s created my identity, like anyone else. I am just the collection of all my experiences.”