App download reports and data is always something that is interesting to read and takes the reader by surprise while also providing interesting insights into the future. This September's list of top social applications by ST is nothing less and will surely provide some interesting insights into the social media industry.Topping the September list is none other than the small video format giant TikTok. Being the social networking application with the highest growth rate since a long time, TikTok has again maintained its legacy and managed to gain more than 59 million downloads this September 2021. With TikTok application already taking US market by storm, one might wonder that the majority of these 59 million downloads might be from the US, they however were from a country Douyin in China, around 16% of these downloads were from Douyin. United states however is not far, with estimated 10 percent installs, it lies on the second position.Now coming towards another social app which keeps people connected from long distances, Facebook owned by Mark Zuckerberg which remained the second most downloaded non-gaming app worldwide this September 2021. Facebook in September managed to gain more than 51 million downloads, putting it right behind TikTok thus proving that Facebook is catching up with it's competition. The countries which were surveyed to have most Facebook installs were India with 29 percent after India was Indonesia with a solid 7 percent.Following Facebook was it's daughter company Instagram which held the 3rd position in the list and thus is the third most downloaded social app in September 2021.Following Instagram on the 4th and the 5th position are again applications owned by the social giant 'Facebook'. On the 4th spot we had WhatsApp and Messenger followed right after it.This data also includes the App Store download and Google Play download worldwide between the dates 1st September, 2021 till 30th September, 2021. However, the apps which aren’t included in this list are Apple apps and Google pre-installed apps, as only specific apps were included. Third party stores are not counted in the estimates of Android.In the overall downloads list TikTok managed to attain first position, Facebook was on second number, the third number was attained by Instagram and WhatsApp was seen on fourth position.App store Downloads list had TikTok on first position, National Anti-Fraud Center was on second number, YouTube was seen at third number, WhatsApp on fourth number and Instagram placed at fifth number.Lastly the list of Google Play Downloads had social app Facebook on first position, Instagram on second position, TikTok on third position, Messenger was seen at fourth position and the last social app WhatsApp was found on fifth position. 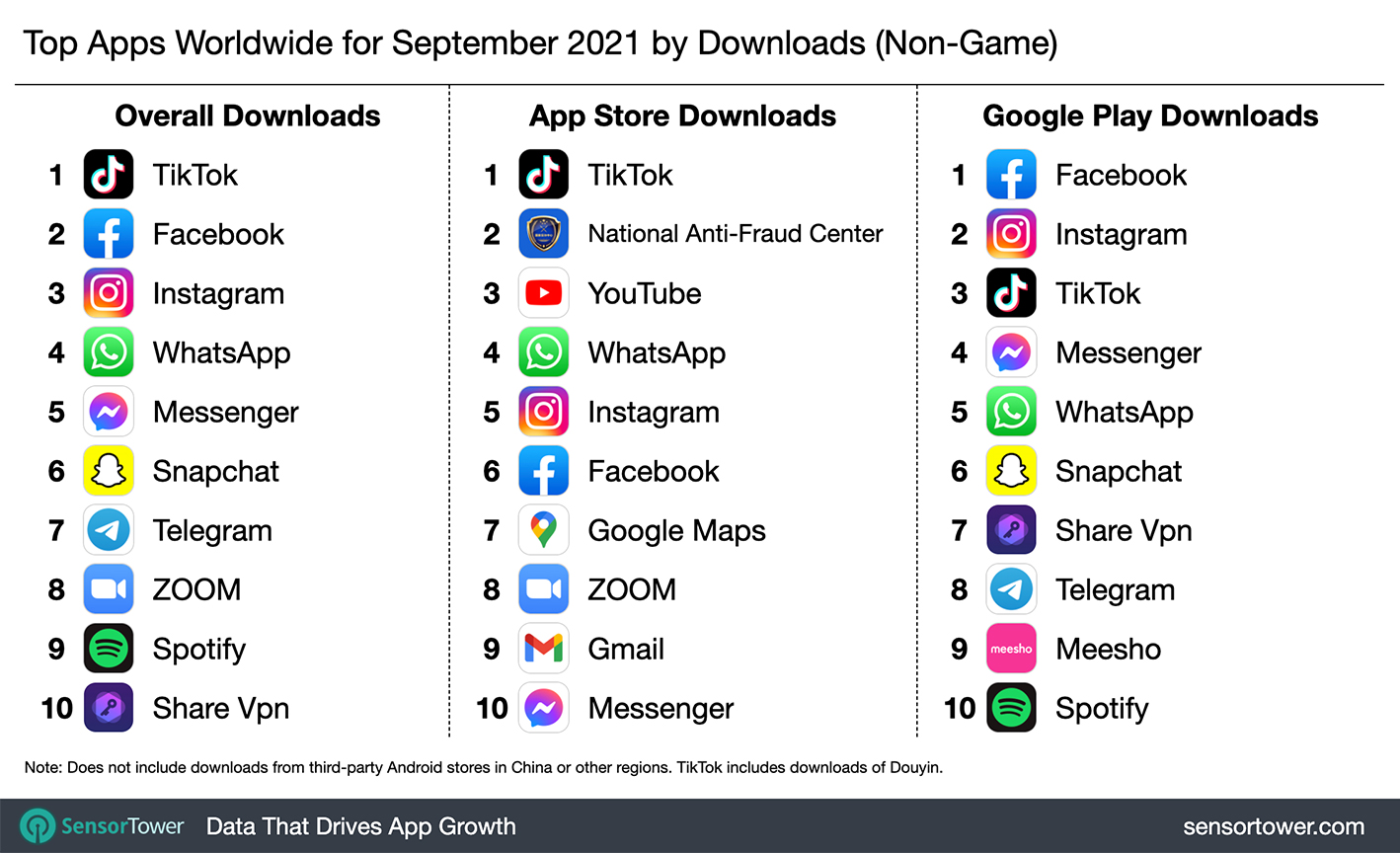